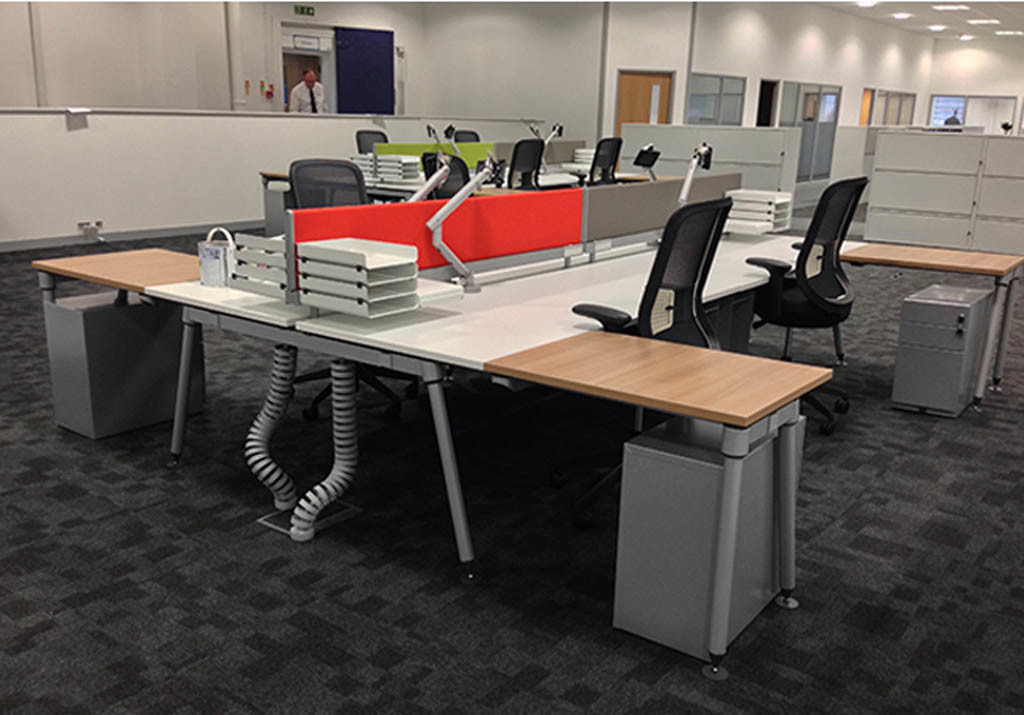 Vision Projects recently completed the second phase of an ongoing refurbishment of the office space at engineering giants Taylor Hobson. The Leicestershire based company that specialises in precision technology facilitate a large number of there office based staff at their New Star Road site in Thurmaston. The office was last refurbished in the 1970’s and the furniture, fixtures and fittings were long overdue for an upgrading. Working closely with upper management and facility supervisors Vision were able to create a modern and colourful office design that could be carried out in a number of phases with minimal disruption to the day to day operations of a busy office environment.

The product chosen to replace the existing furniture was the Sense desking system from Herman Miller. This was preferred to other desking options due to its wide range of finishes and colour options along with its easy assemble and choice of personal accessorise which allowed the client to tailor workstations to suit individual needs. The desks where specified with a clean modern white tops, metallic legs and privacy screens in a mix of vibrant colours. Desking returns where specified in a natural wood finish to soften the effect of the furniture on the environment and install a feeling of warmth.

The storage solution was also selected from the Herman Miller range, this time in the form of the Meridian lateral filer which enabled the client to separate areas of the office using storage that went above and beyond the individuals need.

For the task chair the client required a seating solution that was ergonomically designed, yet stylish and affordable. Vision were able to suggest a range of chairs that fit the bill and after a trial the client selected the Orangebox DO chair. This was specified with all black components with the exception of a white back plate which tied the chair nicely into the corresponding workstation.

The Essence Maze carpet tile from DESSO was continued on from a previous phase, preferred over its peers due to is modern design and durable colour choice. The proposed flooring scheme spreads beyond the latest phase with the Essence collection being used to tie the various departments together with a striped version from the same range being used to denote walkways. The entrance to main office space has been designed to act as an atrium with the large open space denoted by two curving walls. These walls were created in order to break away from the rigid grid structure that the office had conformed to for so many years. The space is currently awaiting new carpet and some feature furniture to finish it off.

Previous Post
Next Post
We use cookies to ensure that we give you the best experience on our website. If you continue to use this site we will assume that you are happy with it.Ok